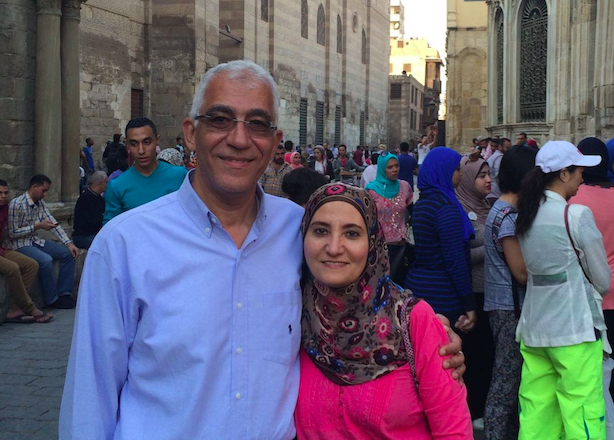 Today Ola al-Qaradawi turned 57 alone in a solitary confinement cell in one of the worst prisons in Egypt.  Although she has been concealed from the world, the world is speaking out for her freedom.

On her birthday she and her husband Hosam Khalaf were transferred to the courthouse for their pretrial detention extension hearing. As per usual, the judge extended their detention for another 45 days. Whe continues to be denied her right to due process and this renewal is the 12th time since she was taken by State Security officers on June 30, 2017.

Lawyers argued in court that Ola and Hosam’s detention cannot be linked to the regional conflict. Ola broke down in court and lawyers are very concerned about the physical and psychological impact the solitary confinement is having on her. They appealed for Ola and Hosam to be transferred to house arrest but the request was denied. To date Ola and Hosam have never been charged.

But after 530 days of solitary confinement the international community has taken notice and has been calling on Egypt to release Ola and Hosam. This week two major parliamentary institutions have spoken out on Ola and Hosam’s arbitrary detention.

This week, in a letter to US Secretary of State Mike Pompeo published on Wednesday December 12th, 46 members of the US House of Representatives said they “cannot ignore abuses of fundamental human rights” under Egyptian President Abdel Fattah al-Sisi’s government. The lawmakers pointed to the case of Ola al-Qaradawi and her husband, Hosam Khalaf, who have been detained without charge or trial since June 2017. The couple’s detention “lacks a legal basis,” the lawmakers wrote in the letter, citing a United Nations Working Group on Arbitrary Detention report.

On Thursday December 13th the EU Parliament passed an urgent resolution that condemned the illegal detention. “Ms Ola al-Qaradawi, a Qatari national and her husband Hosam Khalaf, an Egyptian national have been detained in appalling conditions in Egypt since June 30th 2017 with no charges formylated against either of them; whereas in June 2018 the United Nations Working Group on Arbitrary Detention found that they have been subjected to cruel, inhuman or degrading treatment that may amount to torture, declared their detention arbitrary.” The resolution then urges the Egyptian government to stop all discriminatory measures put in place on Ola al-Qaradawi and Hosam Khalaf.

Furthermore, the Interpol has cancelled the red notice on Dr Youssef al-Qaradawi, Ola’s father as they have found the request by the Egyptian government unfounded and politically motivated and are concerned about repercussions it may have on him given the way Egyptian authorities have been treating Ola and Hosam. The following is an excerpt from the report:

Ola and Hosam have been detained by Egyptian authorities without charge or trial for over 530 days. #FreeOlaandHosam has launched an email campaign to US congressmen and Senators on the Foreign Affairs Committee asking the American government to step in and reunite Ola and Hosam with their children. Help us in fighting for their freedom by signing this petition and forwarding it to all your friends and family.

Read more about the recent support and media coverage #FreeOlaandHosam has received over the past two weeks in the following links:

Motion Adopted by the EU this Week

TRT World: The daughter fighting to release her parents from jail in Egypt