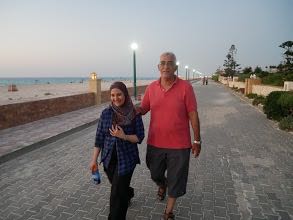 Yesterday Ola and Hosam were transferred from prison to the courthouse in the police academy within the Torah prison complex for their pretrial detention extension hearing. The lawyers continued to call in court for the release of Ola and Hosam, however the judge extended their detention for another 45 days without any due process.

The State Department’s 2018 Report on Country’s Human Rights Practices has been released and has a section on Ola and Hosam.

“Authorities continued to hold Ola al-Qaradawi and her husband Hosam Khalaf, who were arrested in June 2017 while on vacation in Egypt. Al-Qaradawi was being held in solitary confinement in Cairo, had limited access to a lawyer, and had yet to be formally charged. In December, Khalaf received a visit from his father and sister. According to the family’s statements to the media and international NGOs, they were being investigated in connection with belonging to the MB and spreading information aimed at distorting Egypt’s image. On June 12, the UN Human Rights Council’s Working Group on Arbitrary Detention issued a report concluding that the arrest, detention, and imprisonment of Ola al-Qaradawi and her husband Hosam Khalaf was arbitrary. The report included information provided by the government responding to the allegation that the arrest was arbitrary.”

Ola and Hosam have been detained for over 620 days. They have never been charged and no evidence has ever been presented before the courts.

The #FreeOlaandHosam movement continues to gain support nationally and across the world. The movement calls on the prosecution’s office to serve justice and reunite Ola and Hosam with their children, grandchildren and loved ones.