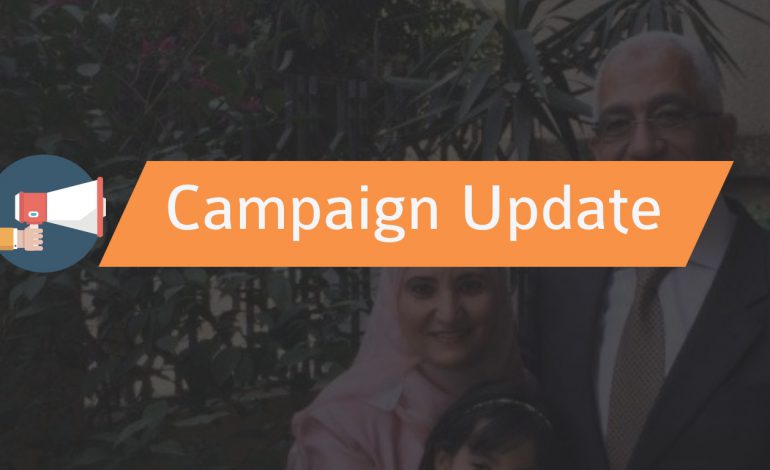 Today Ola al-Qaradawi was transferred from prison to the courthouse. After two years or pre-trial detention, she was given a restricted release with precautionary measures requiring her to report to a police station three days a week and attend a court hearing every 45 days.

Legally, it was expected that the court would order Ola and Hosam’s release on the completion of 2 years of pre-trial detention, but to the dismay of their lawyers and family, Ola was given a conditional release, and Hosam remains under pre-trial detention.

The family is happy for this positive development and hope that the court decision will be executed without delay so Ola can be immediately transferred to a hospital for medical care.

“While we hoped for full justice today, my children and I are relieved that my mother will be released. We are grateful to God and we are hopeful that this is the first step towards her full freedom. Ola deserves to be with her children and family and should be given a full and unconditional release. I pray that my father will be released without delay as well,” says Aayah Khalaf, Ola’s eldest daughter.

Hosam’s hearing has been delayed to August 4th due to security concerns surrounding the African Cup.

For the last 732 days Ola has remained in solitary confinement subjected to the worst conditions known in her prison. Hosam has also remained in detention and denied all his rights, even the most basic privileges other detainees receive.

Both have been routinely renewed every 45 days without charge. There is no investigation and no evidence has been presented to the courts. Their lawyers have never been given a single file on the case.

The last resort for Egyptians arbitrarily detained is the “legal expiry” of pre-trial detention – 2 years. Even that right has been taken away from Ola and Hosam.

The #FreeOlaandHosam campaign continues to advocate for Ola and Hosam’s immediate and unconditional release. We call on the prosecution’s office to serve justice and reunite Ola and Hosam with their children, grandchildren and all loved ones once again.