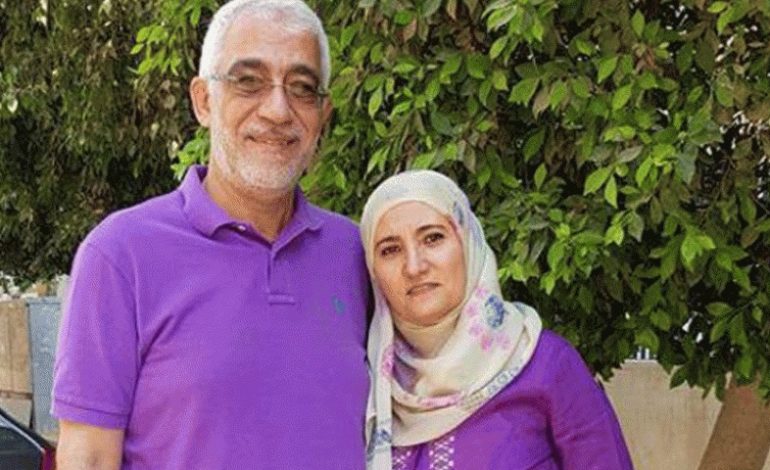 On Tuesday, February 20, 2018, U.S. legal permanent residents Ola al-Qaradawi and Hosam Khalaf had their detentions renewed by an Egyptian judge for an additional 45 days.  Their children and grandchildren in the U.S. are incredibly concerned for their health, as this renewal comes after the couple has already spent more than 235 days in detention amid reports of deteriorating physical and mental well being.

Ola is a Qatari citizen and was approved for legal permanent residence in the U.S.  She and her husband Hosam, an Egyptian national who also was approved for legal permanent residence in the U.S., have eight U.S. citizen family members.  The couple was arrested without a warrant by Egyptian security forces on June 30, 2017, while on vacation in the north of Egypt.  Since that date, they have been continuously detained without charge, denied access to legal counsel for extended periods, denied all family contact, denied the consular visits to which Ola is entitled as a Qatari citizen, and subjected to inhuman treatment and detention conditions during their imprisonment in Egypt.

These detention conditions and instances of mistreatment are only worsening with time.  Ola and Hosam’s lawyers only have brief, non-confidential opportunities to speak with their clients during detention renewal hearings.  During the latest hearing, their counsel learned that Ola – who has been subjected to solitary confinement throughout the entirety of her detention – has been placed in an extremely small “punishment cell” with only a mattress and blanket.  There is no toilet or sink in the cell, and she is permitted to leave her cell to use the bathroom only once a day, in the morning, during which she is allowed to take a cold shower and use the toilet.  She is completely isolated from human contact, and it is taking a heavy toll on her mental health.  The only other person she can hear is the other female prisoner in her wing, who has been imprisoned there for four years and has relentlessly harassed Ola and abused her physically on one occasion.  Ola has reported to her lawyer that she fears she will have a mental breakdown.

Hosam is facing a significant amount of psychological torment given the conditions under which is wife is being held.  Hosam was held for three months in solitary confinement, but he has since been moved into a cell with three others.  He has also previously reported being denied access to medical treatment when he complained of pain in his eyes.

At Ola and Hosam’s latest detention renewal hearing on Tuesday, they were brought into the court room and placed into separate glass cages.  Upon Ola’s request to share some biscuits that she had with her husband, the guard permitted her to join her husband’s cage.  The couple was allowed to embrace and speak with each other briefly for the first time in months before another guard abruptly separated the two and put Ola in a cage that was further away from her husband for the remainder of the hearing.  Though their lawyers argued for dismissal of their case, the judge issued the unwarranted 45-day renewal of detention.

Since Ola and Hosam’s arrest in June 2017, their family and counsel have engaged in a ongoing campaign of media and international advocacy on behalf of Ola and Hosam.  On September 22, 2017, their daughter Aayah Hossam went public with the story of her parents’ detention, publishing an op-ed in The Hill, “My Family Knows Egypt’s Human Rights Abuses First Hand.”  That same day, their international counsel Jared Genser submitted a petition to the U.N. Special Rapporteurs on Torture and the Right to Health regarding the inhuman detention conditions under which Ola and Hosam are held.  On October 2, 2017, Genser followed with a petition to the U.N. Working Group on Arbitrary Detention, explaining that the Egyptian government is arbitrarily depriving Ola and Hosam of their liberty in violation of both domestic and international law.  Most recently, on January 18, 2018, Aayah published a second op-ed, this time in Newsweek, entitled “Mike Pence, Free my Family Imprisoned in Egypt.”  Additionally, Aayah has twice visited Washington, D.C. in the last six months to meet with members of Congress and the Administration regarding her parents’ detention in Egypt, and to urge the U.S. government to take a strong stance with the Egyptian authorities to protect her parents’ fundamental rights.

Numerous human rights organizations have condemned the detention and mistreatment of Ola and Hosam.  For example, Amnesty International issued an urgent action appeal on September 8, 2017, calling on the Egyptian authorities to immediately end Ola and Hosam’s solitary confinement and to ensure humane conditions for the couple and access to health care.  On September 14, 2017, Human Rights Watch found that the Egyptian authorities had repeatedly violated Ola and Hosam’s fundamental rights and demanded authorities issue charges or immediately release them.  On November 29, 2017, Amnesty International issued a second urgent action appeal, warning that Ola and Hosam’s health is “critically deteriorating” and again urging the the Egyptian government to allow the couple their fundamental rights of due process and adequate conditions to maintain their health.