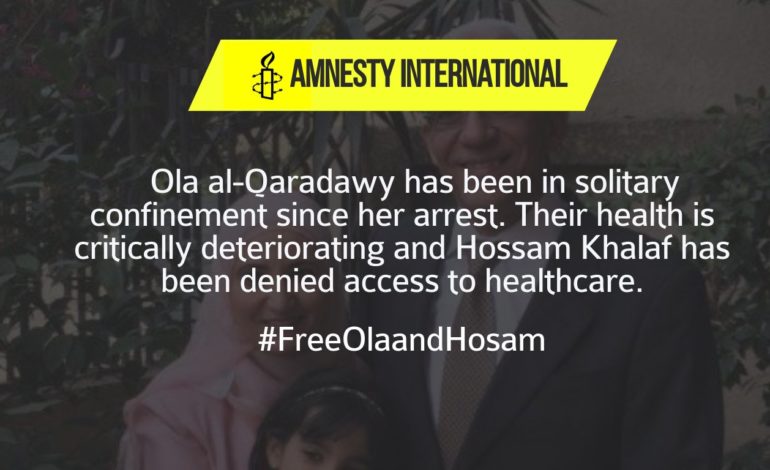 Ola Al-Qaradawi and Hosam Khalaf have been arbitrarily detained for 152 days since their arrest on June 30th 2017. The length of detainment and the severity of the conditions which Ola and Hosam are subjected to has triggered Amnesty International to issue a renewed urgent action to call for their freedom [https://www.amnesty.org/en/documents/mde12/7506/2017/en/].

According to Amnesty International “they were arrested on unfounded charges and are currently being held in very poor prison conditions. As a result, Ola and Hosam are experiencing deteriorating health conditions and are both being denied access to healthcare.”

Ola and Hosam have been held under the pre trial detainment law. In 2013 interim president Adly Mansour passed this law that effectively allows detainees to be held on remand indefinitely. The law was established to pave the way for the current regime to arrest and detain thousands of victims and rein in opposition and civil society more broadly. Human rights groups have reported that many prisoners indicate that they have not had meaningful access to their lawyers, have often had their detention remanded without even appearing before a judge, and have not seen any evidence or official charges.

This is exactly the case with Ola and Hosam. Their lawyers have not been able to obtain the official documents with the charges to date. Instead the lawyers have only been told informally they are being investigated for belonging and funding an illegal or non-registered group, accusations that Ola and Hosam completely deny.

Solitary confinement for 152 consecutive days for an elderly woman is unprecedented even under this regime. Yet Egyptian state security continues to subject Ola to extreme abuse through the continued use of solitary confinement.